The National Executive Committee of the University Teachers Association of Ghana (UTAG) has resolved to temporarily suspend its seven weeks strike action to enegage with government.

This follows a National Executive Committee (NEC) crunch meeting held on Monday February 21, 2022 to deliberate on the ongoing industrial action.

A statement signed by UTAG President, Prof Solomon Nunoo said a roadmap has been agreed upon between the association and government.
University of Ghana Chapter Secretary of UTAG, Prof. Ransford Gyampo in a Facebook post said “be informed that at a National Executive Committee meeting held this evening, we decided to suspend our industrial action and to allow negotiations to commence and be concluded in two weeks.”

UTAG has been on strike since January 10, 2022 to force the government to restore the conditions of service agreed in 2012.

An injunction has however been placed on the strike after an appeal by the National Labour Commission (NLC).

The court has on two occasions ordered both parties to adopt an out-of-court settlement.

UTAG has however not taken a decision to end the strike.
The 2012 conditions of service pegged the Basic plus Market Premium of a lecturer at $2,084.42.

UTAG had complained that the current arrangement has reduced its members’ basic premiums to $997.84. 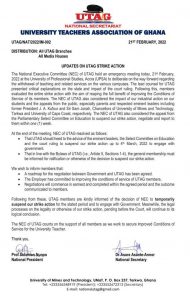