Breaking: National Service Personnel To Go On Strike On Monday

This action has to do with the delay in payment of their allowances as they are being owed two months of unpaid allowances.

The official letter that was released to all media houses and user-agencies reads:

As part of the measures set in place to demand, there is going to be a press conference and a peaceful demonstration on Monday, 30th May, in Cape Coast, Central Region.

We encourage all National Service Personnel in the country to comply with this directive as it is our right to demand for justice.
Thank you very much 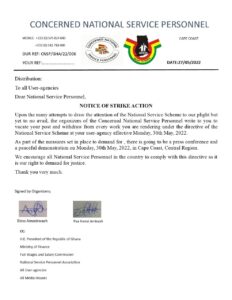